Imam Ja’far Sadiq (a.s.) says that: “An act of charity given openly prevents seventy types of mishaps, and a secretly given charity cools the anger of our Lord Allah (S.w.T.)”1.

It has been related in the same book that the Holy Prophet (S) said that: “Allah says that when the angel of death is asked to remove the soul of a person, and if he or she gives Sadaqah, Allah orders the angel of death to stop”.

Imam Ja’far Sadiq (a.s.) says that: “An act of charity shields us of seventy evils of this world including an ill fated death. The one who gives charity never dies ill fatedly”.2

According to Islamic beliefs, when we give charity, Allah due to his mercy changes our fate. Allah says in the Holy Qur’an that:

Here below are few incidences from genuine and reliable sources to prove this.

Charity in the name of Imam Zaman (aj)!
This is an incident witnessed by the author of this book. Once I was admitted to the hospital, and as I was lying in my ward, I saw a friend of mine bring in his son with a life threatening situation. His son was in acute pain, and when I asked my friend he said that the nurses were taking some tests and soon his son would be taken to the operating theatre.

Well, the nurse took a sample of blood, and we on the other hand started comforting the little boy who was only nine years old. As we were waiting the father of the boy put something small under the pillow of his son.

Shortly after, the doctor arrived and said that they had tested the blood and didn’t think it necessary to operate, and instead some medicine was prescribed for him. The father at once thanked the Imam of our time Al Mahdi (aj) for helping, and then revealed that he had put an amount of money as charity and asked the Imam to help, and this was the result.

Disaster will not reach his garden!
Sheikh Ahmed Mujtahidi says that there was a time when many grape gardens in a village in Shahriyaar in Iran were afflicted with disease, which caused extensive damage to the fruit. There was a man who owned a garden in the same village who on hearing the news was sure that his garden was in a good state.

When the man was asked how he could be so sure about this, he answered that he always gave the Zakaat (Islamic Tax) on the property and also gave out a lot of charity, and this was a guarantee for his property to be safe from disasters.

When people who had heard this went to investigate his gardens in Shariyaar, they found it to be the only garden which had not been affected with the disease. 3

Charity removes illness!
The author of the book Najafiyat, Sheikh Ali Dakheel relates that Al Haj Abdul Husayn Abu Reeha related to him that Al Haj Rasheed Roomaani who was a Syrian businessman once became extremely sick. His family had surrounded him with despair, crying for him.

The sick man asked his family whether they wished him to be well. They admitted eagerly that that was their hearts desire. Well he asked them to give all the food and grains stored in the house as charity. Shortly after he recovered and is said to have lived up to the age of 130 years.

The ship drowned …!
A man known as Al-Hajj Salim Tarih who died in Iraq in 1293 A.H. was a famous ship merchant who traded with other countries. He once asked his trade partner to contribute some money to give as charity. When asked by his business partners why he had given this charity, he answered that he had received some news that the ship in which they had sent their property had sunk. He was certain that the charity would help in the recovery of their property.

Soon afterwards some men came to give Al-Hajj Salim a bag full of dirhams. The men said that all the goods had sunk but this bag which had the money belonging to Al-Hajj Salim was hanging on a nail which was hammered onto a plank of wood that formed part of the ship. This plank together with the bag of money had not sunk.5

Charity in the name of Imam Husayn (a.s.)
Iraq was a nation which in olden times was afflicted just like any other nation with diseases like cholera and typhoid, and the epidemic affected so many people. It is to avert such dangers that the people carried out many religious ceremonies in the name of the great Imam and Martyr Husayn (a.s.).

A man relates that in one such ceremony, the people appealed to Imam Husayn (a.s.) to help them from such diseases. A man after the ceremony had a dream that some armed people came to steal things from them. As they wanted to attempt stealing, the leader of the gang instructed them to stop because he would not like to kill people who had taken part in a ceremony commemorating the martyrdom of Imam Husayn (a.s.).

The gang leader then asked his companions to go to another place.

The next morning the man who had seen this dream heard that, three people had been killed in the neighboring village by thieves.

All this shows that Sadaqah conducted in the name of our Imams is effective in averting problems. 6

Charity averts death!
Allamah Hilli relates in some of his books that the Holy Prophet (S) once passed by a Jew who was going to chop some wood. On seeing him, the Prophet said that the Jew would be bitten by a poisonous snake and die.

In the evening the companions saw the Jew and found it strange that he was still alive contrary to what the Prophet (S) had predicted. So they questioned the Holy Prophet (S) about his predictions. The Prophet (S) asked for the Jew to be presented to him so that he could be questioned.

When the Jew came, the Prophet asked him to open the bundle of chopped wood, and out popped a snake. The Holy Prophet (S) asked the Jew what act he had done on that day.

In reply the Jew answered that he had not done anything in particular except that as he was eating some food a beggar asked him for some of it, so he gave one of the two cakes he had without any hesitation to the beggar.

The Prophet then said that the Jew had been destined to die but for the charity he had given which removes seventy evils. The Jew accepted Islam.

Indeed charity increases your good deeds and your life. 7

A Morsel for Morsel!
A woman from the Bani Israil tribe was washing some clothes on the sea shore. Her child lay near her. A beggar came begging and she quickly gave him a piece of bread which she had.

Shortly after a wolf came beside the lady and snatched away the little baby in its mouth. Well, Allah sent an angel who removed the baby from the wolf’s mouth and the angel retorted: A Morsel For A Morsel.8

Charity averts robbery!
Imam Ja’far Al Sadiq (a.s.) was once travelling with some companions amongst whom were some businessmen who had some goods with them. After some time they became aware that there were gangs of thieves who were waiting ahead planning to loot them. The companions of the Imam wondered what steps to take.

The Imam advised that the best step was to make intention of giving some of the goods in the way of Allah as Sadaqah or charity. This is what the companions did and when they passed the thieves, nothing happened to them. Charity had averted the danger in which they were. 9

In order to make Nabi Yaqub realize the importance of charity, Allah (S.w.T.) revealed to him that due to this act Allah would soon put Nabi Yaqub to a test, and that he should show patience in face of this test.

After that Nabi Yaqub was tested by the temporary loss of Nabi Yusuf, his son, for quite a long period. Due to this Nabi Yaqub really suffered, until he finally was reunited with his son. 10

The morning after the wedding they found the bride still alive. When they asked Nabi ‘Isa’ (a.s.) as to why his predictions were not correct, the prophet asked to see the bride, and asked whether she had done some good act on the wedding night.

The bride replied that there was a beggar who used to beg every Friday night outside the house. On the wedding night, he came to beg as usual and because nobody bothered with him, she got up and went to give him some charity.

LIVE “Help a Child for Education”for 150 students. Click here to DONATE via Justgiving 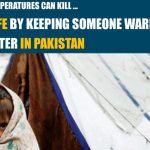 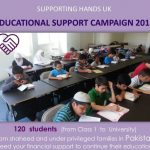 120 students (from Class 1 to University) from shaheed and under privileged families in Pakistan need your financial support to continue their education.

(With your help we supported 80 students in